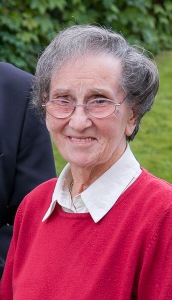 This was a day to celebrate our greatly missed friend, Sylvia Watts, past Vice-Chairman and Secretary of the Friends, course and project leader. It was held at Shifnal Village Hall in conjunction with Shifnal History Group.

The Much Wenlock Day took place on Saturday 22 November 2014 at the Priory Hall. Held in conjunction with the Much Wenlock Civic Society it was a very successful day of talks and walks centred on the town and its people in the presence of the Mayor.

The day featured talks by Ina Taylor and Vivian Bellamy, while there were also displays from Shropshire Archives about the project to catalogue the town’s documents.

The Mayor, Councillor Mary Hill at The Guildhall

The event concluded with a visit to The Guildhall and a walk around the town led by Vivan Bellamy. Download the Wenlock History Day 2014 leaflet.